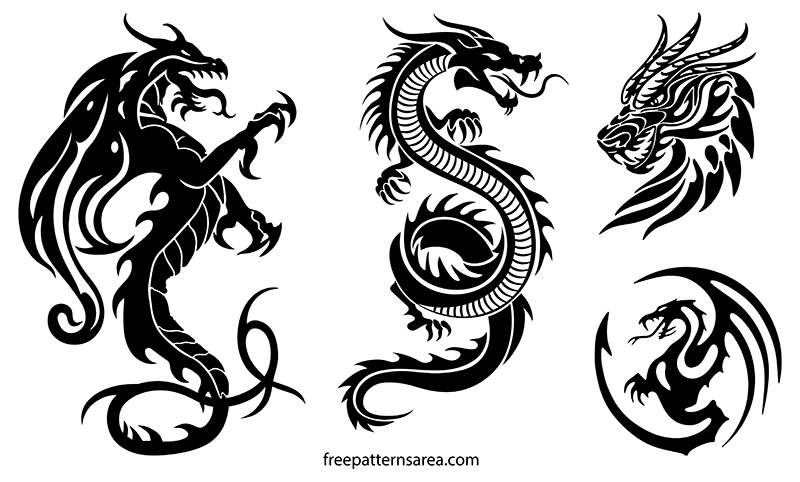 Free vector files that you can download for free with fantastic dragon images inside. Artistic black graphic designs of dragons, which are mythical creatures that you can use as clipart.

Dragons are the most popular and enduring ones among mythological creatures. We see them in many cultures around the world. The first forms of dragons were in the form of powerful snakes or water snakes that were difficult to kill. As time progressed, large scales, strong claws, legs, leathery wings and sharp tails were added to this initial form by different cultures. Some dragons have gained the ability to breathe fire. The immortal dragon named Hydra in Greek mythology had many heads

Today, most people see dragons as fearsome creatures that breathe fire, attack castles, and kill those who try to capture treasures. That’s why they think that dragons should have always been killed. But ancient beliefs gave more modest meanings to dragons. In those days, dragons were benevolent and knowledgeable creatures. In eastern cultures they were usually gods or demigods who had power over storms and rains. People used to think that the drought was caused by a dragon’s laziness. Invoking dragons to bring rain is common in Chinese texts. The dragon symbol was also the emblem of the Chinese imperial flag in ancient times and adorned the Chinese flags until the founding of the republic (1911). 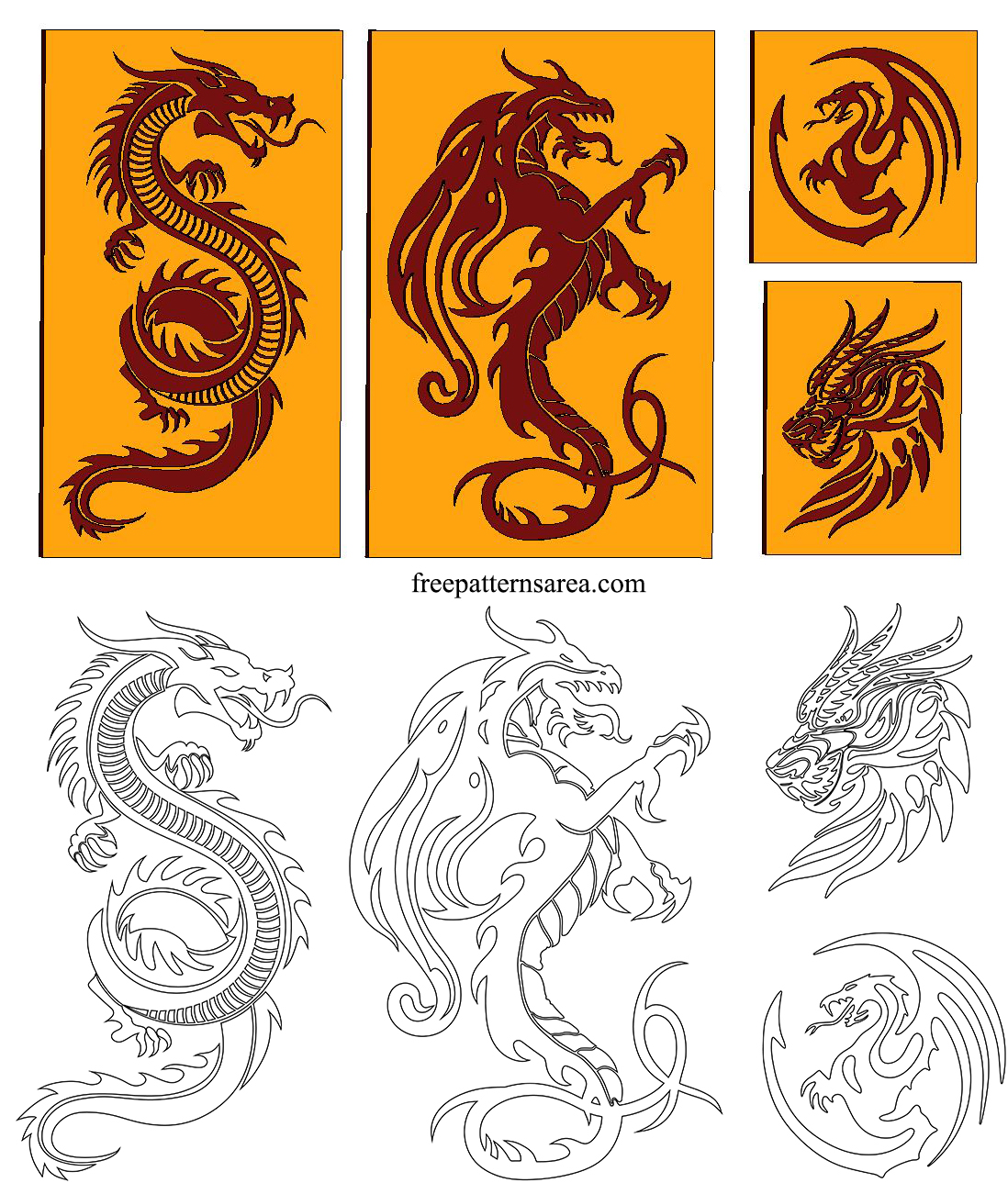 Western cultures viewed dragons from a different perspective than eastern cultures, as evil creatures that enjoyed killing and chaos. They believed that dragons lived in dark and dangerous places. Because of this, they were creatures that needed to be killed or tamed, often by knights, cultural heroes, or saints.

Both cultures thought that dragons were wingless before the Middle Ages. After the Middle Ages, western culture generally began to portray dragons as creatures with wings, four legs, horns, and fire breathing.

In this project, we have drawn 4 fantastic dragon images and published these designs in 8 different file formats. The high resolution dragon PNG file is a transparent black and white graphic file. EPS and SVG files are dragon vector art files that you can also use as clipart. The free dragon SVG file is also a digital cutting file for cricut and vinyl cutters. The printable PDF dragon file is an outline PDF file. Since Dragon PDF cut out template file is line art drawings, you can use this file as a coloring page or craft idea. DXF and DWG files are CAD block files. The CDR file can be opened and vectorized in Corel Draw. The CDR file can also be used for cutting and engraving on laser cutting machines. 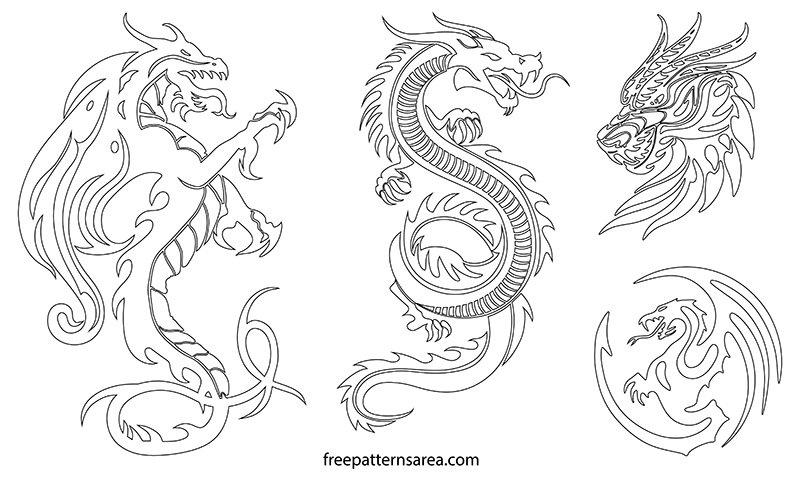 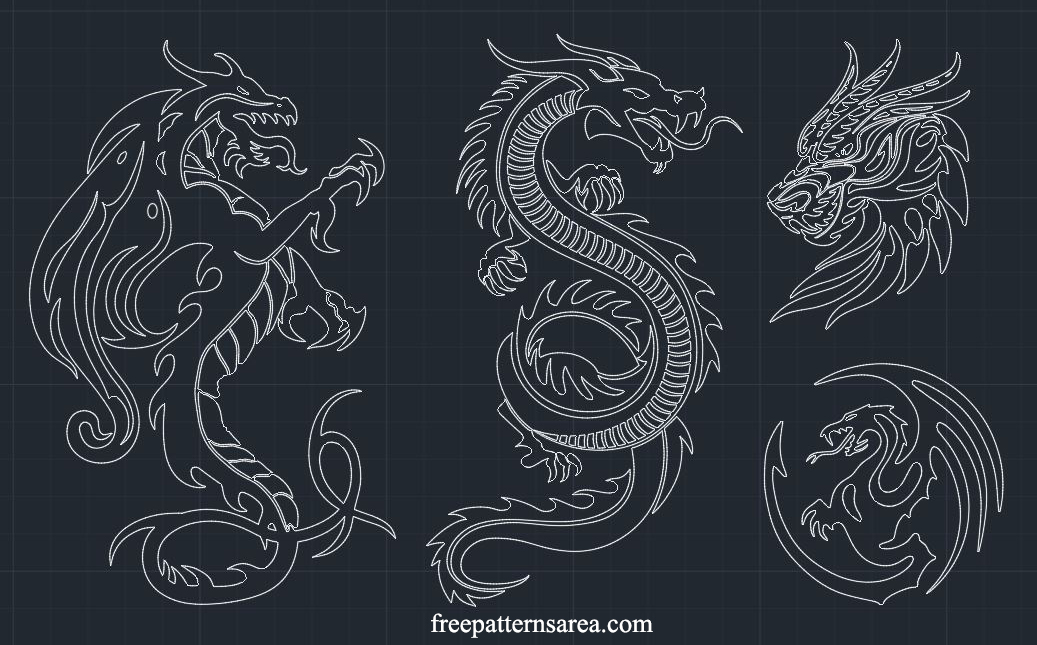