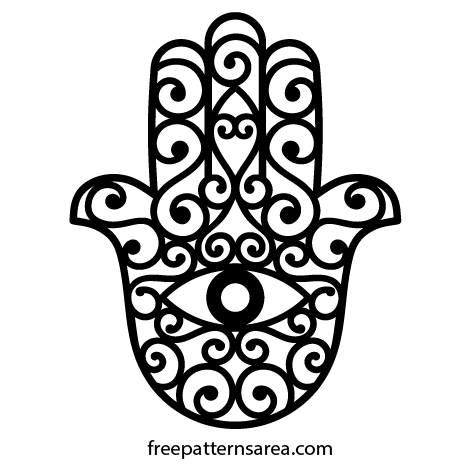 Although the hamsa symbol is a product of pagan cultures that dates back thousands of years old, the sacred hand form is still being used in Judaism and Islam today.

There is the eye of Horus from Egypt tradition or the eye that can see everything in the open hand with five fingers. There may be the blue evil eye talisman inside of the hand in the form which is known as Hand with Eye in Anatolia. The fingers of the hand will look downwards in Judaism while the fingers pointed upwards in Islam.

History: The first use of Hamse is seen in early Mesopotamia and Northern Africa. It was introduced to Jews and Muslim Andalusian state by Northern Africa. The great stone hand at the entrance of the Alhambra Palace in Andalusia is a talisman and it is the most beautiful sample. It is still widely used by Anatolian and Shiite Muslims in today’s Mesopotamia. The Hand of Fatima introduced to Medieval Europe by Andalusia and Sicilian Muslims however it was forbidden by the church due to it is believed that it protects the witches. Also, this symbol found in secret organizations such as Freemasonry.

The Use and Meaning of Hamsa in Judaism:

According to the Jewish culture, the five fingers symbolize the 5 books of Torah (Genesis, Exodus, Leviticus, Numbers, and Deuteronomy). It is also known as the Hand of Miriam. Miriam was the sister of Moses and Aaron. The person who carries this form will be protected against the evil eye energy by the eye. Hamsa symbol is often decorated with the fish symbol. This means that fish will not be affected by the evil energies since they are protected by the sea water. The Hamsa symbol used in many talismans. Hamsa is a Kabbalistic symbol which is believed that it will bring luck and plentifulness, protect against evils and the negative energies of jealous people. We can encounter this symbol in many aspects of Jewish art. It is processed as a symbol on mezuzah boxes which Torah texts are inside of them and placed on the right sill of the entrance door of the houses.

Today, celebrities who wear Hamsa increased with the popularization of Kabbalah doctrine. Celebrities such as Madonna, Britney Spears, and Demi Moore are some of those who wear Hamsa.

The Use and Meaning of Hand of Fatima in Islam:

It is symbolized as the Islamic Prophet Muhammad’s daughter. It is called Hams which means 5 in Arabic due to its 5 finger form. Each of the 5 fingers of Fatima’s Hand represents the five pillars of Islam.

Shahada: There is only one God and Muhammad is his messenger.
Salat: Worshiping and praying to God at 5 special times of the day.
Zakat: Giving 1/40 of your wealth to poor people once in every year.
Fasting: Disciplining your body by starving during the daytime of Ramadan every year.
Pilgrimage: Visiting the Kaaba at least once during your lifetime.
In the belief of Shiite and Anatolian Muslims, 5 fingers of the Hand of Fatima symbolizes 5 holy people in the family of Prophet Muhammad.
1. Muhammad
2. His Groom Ali
3. His Daughter Fatima
4. His Grandson Hassan
5. His Grandson Hussein

It is one of the most favorite symbols of the Islamic world. It is believed that it provides plentifulness, protect you from the energy of evil eyes and keep the evilness away. It takes place in various amulets, lucky charms, talismans, and jewels. It is engraved on paints, walls and door tops. This hand also forms the head part of wands and staffs that Sufi people use.

Hamsa or Hand of Fatima symbol has become a common symbol of many religions and civilizations since thousands of years. It is believed that it provides plentifulness and luck, and used to keep the negative effects such as misfortune, illness, death away which are caused by the evil eyes.

You can download the vector, 2D CAD and 3D designs of this symbol from our page for free. These artistic digital drawing files are cuttable and printable. You can use them in cutting and printing machines such as CNC router, laser cutter or cricut. You can use these files as fabric print, tattoo, vinyl pattern, scroll saw template. You can craft beautiful necklace, bracelet, earring or key holder by using them in jewelry design. You can use them as a template in your engraving and carving works.

Download free design to make a hand of Fatima Hamsa. 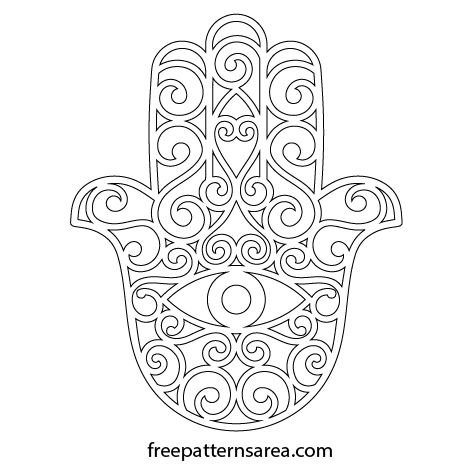 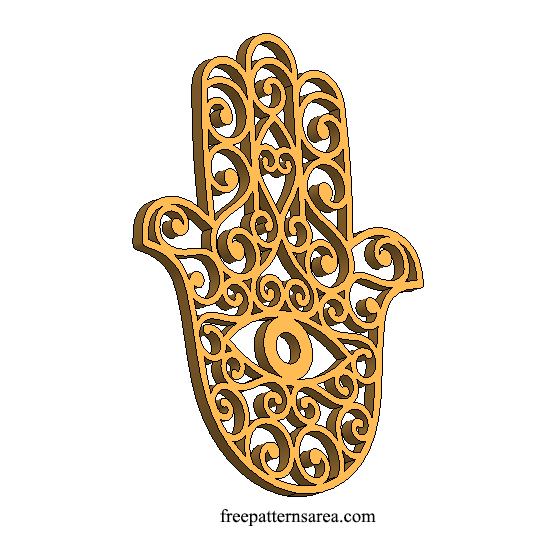 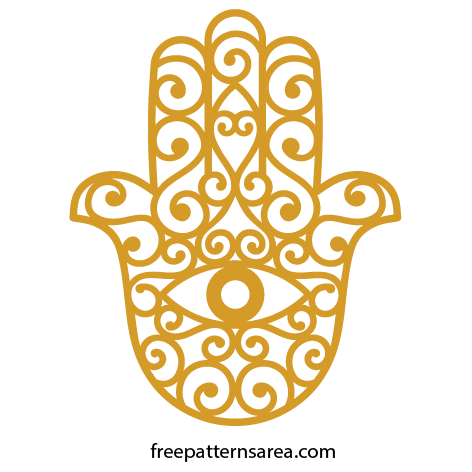 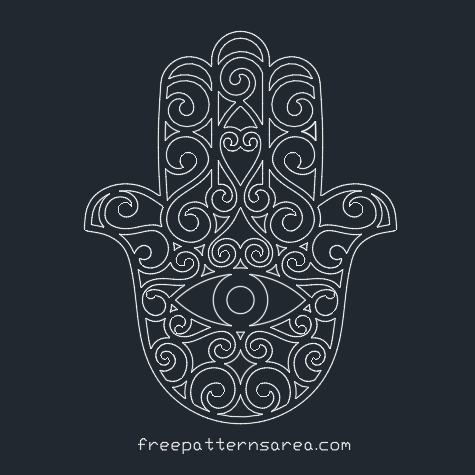